It's finally my favorite week of the term! :D IT'S WEEK NEIN! lol (go here to get the joke)

Anyway back to work, this week I had notes from my mentor to change the ending of my shot to have Stewie get his big head stuck in the bull horns and then have the bull fling him out of the shot. Well I fleshed this idea out and then on Thursday night had an awesome Tutoring session with Malcon Pierce, an Animator at Disney. After seeing my shot and getting notes from Malcon, I decided to start new and go with a fresh idea. From the beginning, I wanted this shot to have a mechanical bull that started out slow and boring and then got wacky. My old idea did that, but not in a very entertaining way.. Anyway this past weekend I took about 24 hours, almost straight through, and reblocked out my shot. Now I've got it to the point where I can turn it in as blocking plus.

Overall I'm really happy with the way that this new idea is going and starting to flesh out. Some of my favorite parts of this is between frames 170 and 180. :) Also I really wanted to play with pushing the poses past where I have before, and also stretch things farther than before.

Also some of you wanted a version that you could "frame by frame," I'll post a version on my dropbox for you all as well from now on.
Frame by Frame
Posted by Unknown at 3:14 PM No comments:

So its week 8! :) I've got a pretty good start on my next shot and things are looking pretty good. This past week, I had the pleasure to find out that I was one of two winners of the Visual Effects Society's Douglas Trumbull Scholarship! VES is very well known in the film industry and I'm still in shock that they decided that I fit their criteria for the scholarship. This really means a lot to me and will help me focus on school more and be able to reach my goal of animating for feature films.

Ok so now I'm back from vacation, had some really good times and would recommend any family to go to Gatlinburg, TN at least once!

But this week I had to recover from the bad previous week and also plan out my next shot. So I was able to take what time I had after vacation to polish up my Spy shot into the final version. Below you'll find out how it turned out.

Now I'm alright with how it turned out, but I was ready to take the lessons learned from this shot and put them towards my 3rd and final shot for Class 3! :)
My next shot will have a fat character riding a mechanical bull. Over vacation I was able to spend a lot of time drawing and thinking about this shot and getting a good plan! 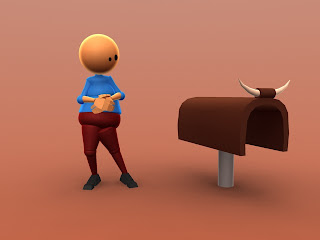 The look and style of the character. (colors will be changed in the final version, the brown leather runs into his red pants :/ ) 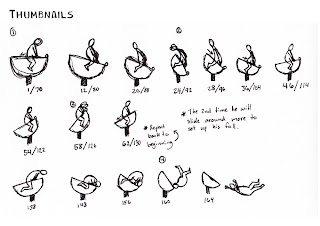 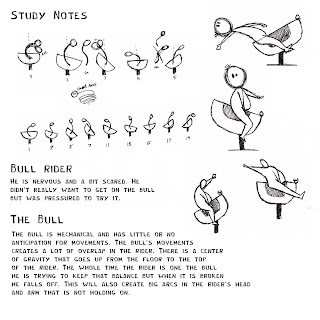 And also is my video reference for the shot as well.
Posted by Unknown at 7:21 PM No comments:

Week 6 and it's halfway! This post is reallly late but I needed to post it up anyway to keep the trend going. :) This week was a busy week because I was getting ready to go on vacation with my fiance's family down to Gatlinburg, TN. So a lot of my time was taken up and it reflected in my grade. But this week was to work on my blocking plus version of my shot. Below you will find that. :)

Posted by Unknown at 7:14 PM No comments: